If you’ve been bra shopping while pregnant, you would have noticed that the vast majority of maternity and nursing bras are wireless. However, there are a handful of flexi-wired nursing bras on the market.

Admittedly, I am not a big fan of underwire nursing bras but they can make or break some moms’ breastfeeding journey.

Should nursing bras have an underwire?

If all the nursing bras in the world had to be either wireless or underwired, I would choose wireless. But life is never so simple.

Nursing bras should be wireless because most breastfeeding moms have fluctuating breast sizes, intermittently engorged breasts and sensitive skin. Wireless bras do a better job at being flexible, soft and comfy.

However, underwired bras provide much better support, lift and shape. Moms with large breasts and those who need more breast support need flexi-wired nursing bras to provide the much needed structure.

The Cake Maternity Croissant Nursing Bra is a flexi-wired nursing bra that is also super soft and comfy: 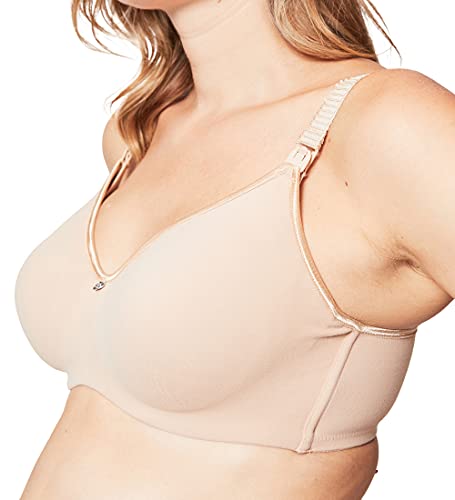 What is the difference between flexi-wire and underwire?

An underwire refers to the traditional firm and rigid moon-shaped underwire we get in our regular wired bras. Regular underwired bras are 100% not recommended when you’re pregnant or breastfeeding.

A flexi-wire bra contains a lighter, more flexible wire which sits in the wire channel in much the same way as an underwire bra but is more supple and bendy. The moon-shape is wider to help ensure that it sits around the breast tissue and doesn’t press on it.

You can see the half-moon curve of the Zest Nursing Sports Bra flexi-wire is much wider than a regular underwire curve: 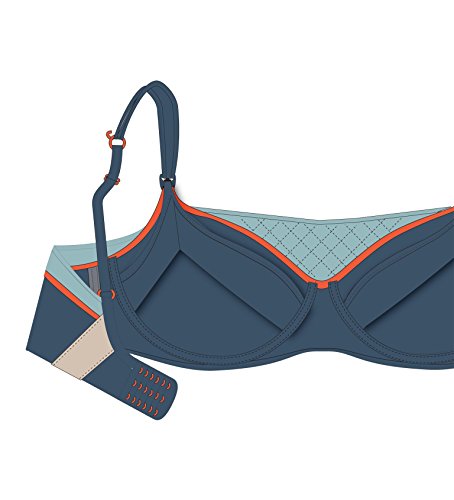 When you first start breastfeeding, your breasts will go through many changes, which is why flexi-wires are designed to be accommodating.

Flexi-wires provide fit and support without being too rigid so that they can flex and move with you.

Because of their composition and design, they will be less likely to encroach on your actual breast tissue when you are wearing the correct size. This prevents painful clogged ducts.

All underwired nursing bras have flexi-wires and the terms ‘underwire’ and ‘flexi-wire’ nursing bra are used interchangeably.

What are the benefits of wearing an underwire bra?

Underwire nursing bras are designed to provide support for the breasts and are generally worn by women who have large breasts or prefer more support. No matter how many support features a wireless bra has, nothing beats an underwire for support.

Flexi-wired nursing bras also provide much needed lift to sagging breasts and give your breasts a more flattering shape.

Plus, they often look better, like this Cake Truffles Nursing Bra: 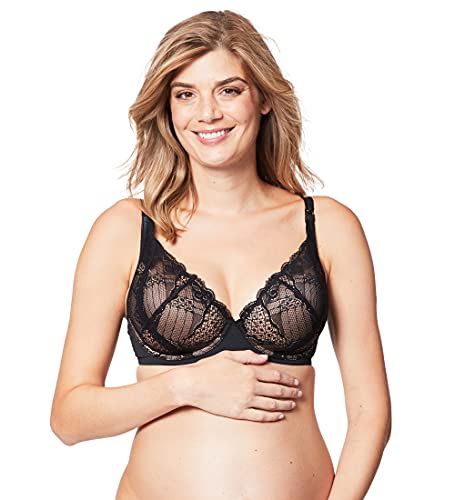 Read my detailed review of the Truffles Nursing Bra.

There are many features that make a flexi-wire nursing bra worth its price. However, the most important points to consider are:

The Cake Tim Tams Nursing Bra ticks all the boxes: 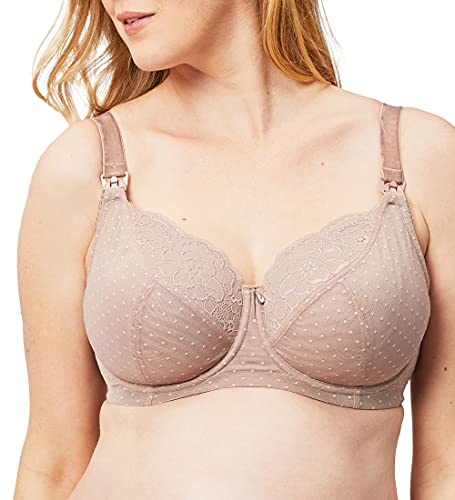 What are the disadvantages of wearing an underwire nursing bra?

Underwire bras can be uncomfortable for some women during pregnancy and when breastfeeding due to the changes their bust goes through.

They can dig into your breasts, causing discomfort and pain.

Underwires are not recommended in new moms at all. In fact some experts recommend breastfeeding for at least 4 months before even considering flexi-wired nursing bras.

While the flexi-wires are able to accommodate breast fluctuations to some extent, they are nowhere near as stretchy as wireless bras.

When your breasts increase in size from milk production, your flexi-wired bra will suddenly be too tight and press on breast tissue, causing painful clogged ducts.

Should you wear an underwired bra while nursing?

Most lactation experts say it’s best to skip the underwire when you are breastfeeding. Breasts change a lot as milk comes in. Often the wires can shift and be on the breast tissue itself instead of supporting the breast underneath.

Breast fluctuation doesn’t only happen to new moms. Even though your breast size stabilizes after about 3-4 months of breastfeeding, every time your baby feeds less, or if you start pumping at work and you’re not as regular, your breasts will get engorged with surplus milk. This happens throughout breastfeeding no matter how long you’ve been doing it.

There are many supportive bras available without wires, even fortified ones that are specially designed to support busty women. 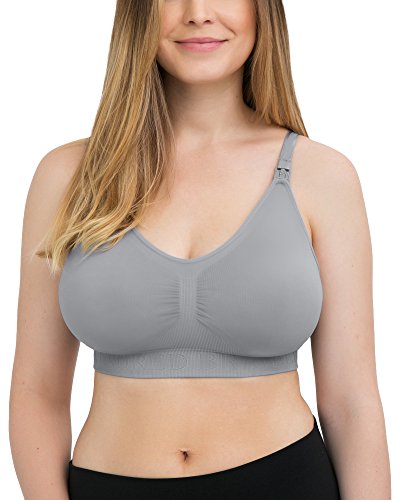 Check out my review of the most supportive wireless nursing bras for large breasts.

Is an underwire bra bad for nursing moms?

Not exactly. Flexi-wire bras can be very helpful in some cases.

Though it is generally recommended to avoid underwire bras while breastfeeding, some women find that they still need the support that these bras provide. If you are one of these women, it is important to make sure that your bra fits well and your breasts don’t get engorged too often.

These are the best underwire nursing bras on Amazon.

When can a nursing mom wear underwired bras?

Generally, nursing moms can consider flexi-wired nursing bras after 3-4 months of breastfeeding. By this time, breast milk production has stabilized and your baby has settled into a feeding routine.

However, if you continue to have breastfeeding issues or still struggle with engorged breasts, underwire bras will make things worse.

Even if you have started wearing underwired bras and there is a disruption to your routine, causing surplus milk production, switch back to wireless bras.

Breast changes can happen throughout breastfeeding and if you feel your underwire nursing bra doesn’t fit anymore, you should stop wearing it.

What dose the Australian Breastfeeding Association say about flexi-wired bras?

The Australian Breastfeeding Association don’t recommend inflexible underwire bras as rigid underwires may put pressure on the breast when it is fuller, causing blocked ducts.

However, nursing bras with flexible low-gauge wires are designed to flex and change position with your changing shape. They still don’t recommend flexi-wires but concede that these bras are less likely to cause problems.

What type of bra should a nursing mother wear?

New moms should stick to stretchy and comfy wireless nursing bras as your breast size is fluctuating wildly at the beginning of breastfeeding. These are the best nursing bras for new moms.

If you are going back to work and pumping, chances are you won’t be able to pump are regularly as you would like. I also found my breasts intermittently got engorged because I didn’t pump on time. I recommend going back to work wearing wireless nursing/pumping bras like the Momcozy Pumping Bra: 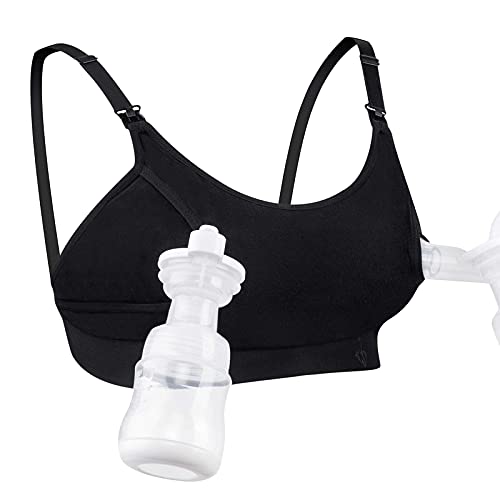 However, if you really want to wear an underwired pumping bra, the Dairy Fairy Ayla Pumping Bra is the only flexi-wired bra I would recommend because it has a demi-underwire: 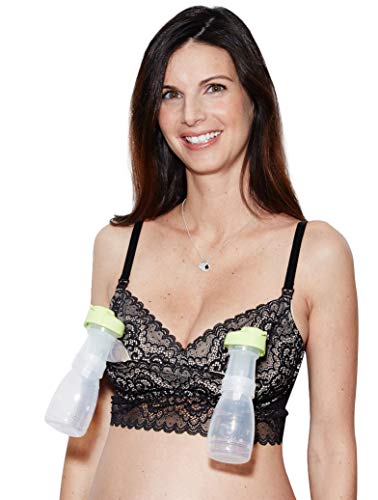 Nursing bras should be wireless. However, if you have large breasts or need more breast support, flexi-wired nursing bras can be your answer. Just make sure it fits well and the wire doesn’t sit on your breast tissue.

New moms should opt for a wireless nursing bras to avoid complications.

From January 2022, I am donating 5% of affiliate earnings to the Redkite Foundation.

Redkite provides practical, emotional and financial support for families who have a child with cancer.